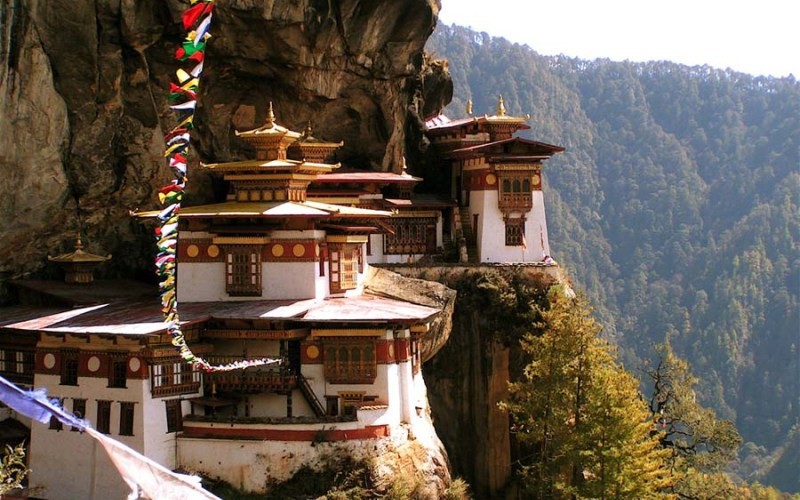 This classic tour of Bhutan is one o the best known and highly rewarding of Bhutan tours. As the name speaks for itself, Bhutan highlights tour is all about enjoying Bhutan at its best. Getting insight into important and famous cultural, religious as well as architectural riches of Bhutan is what you admire all throughout this amazing trip of 5 days. You will come across the delightfully friendly Bhutanese people and get to know their traditions, culture and day to day life at first hand. It’s a short tour in duration but it surely leaves an ever lasting memory on you.

Many feel as though the Bhutan Highlights Tour ends in no time. They will only want to come back and see more. This Bhutan tour can be extended or combined with some hiking and trekking trip. Based on what you expect, we can serve you for the experience of your lifetime.

Day 05: Departure day. End of the tour. Transfer to airport and fly to onward destination.

Transfer to airport and fly to Paro. A spectacular descent through mountainous valleys brings you into the Kingdom of Bhutan. The beautiful airport is your first glimpse of what’s ahead. After clearing customs and visa control you are met by your driver and guide. A short drive along the valley brings you to Thimphu, the capital of Bhutan. This very picturesque drive past rural homes, hillside monasteries and chortens only takes 1.5 hours. Settle into your hotel and after lunch at a local restaurant start your sightseeing, visiting the Textile Museum, a traditional paper making factory and the Post office to see Bhutan’s beautiful stamps which also depicts about country’s myths, traditions etc. Alternatively you can do less formal sightseeing and walk around the town with your guide. Dinner at restaurant. Overnight at Hotel.

After breakfast, drive to Punakha via Dochula pass. If the weather is clear, we stop for a while at Dochula pass to view Higher Himalayas. On the way, stop a while to view Chimi Lhakhang, which was built by Lama Drukpa Kuenley in 15th century. He subdued the demons with his “Magical Thunder bolt”. The Temple is also known as “the Temple of Fertility”.

Lunch in Punakha. After lunch, visit Punakha Dzong built in 1637 by Shabdrung Ngawang Namgyal and is situated between Pho Chu (Male river) and Mo Chu (Female river). For many years until the time of the second king, it served as the seat of the Government. The construction of the Dzong was foretold by Guru Rimpoche, who predicted, “a person named Namgyal will arrive at a hill that looks like an elephant”. There was a smaller building here called Dzong Chu (Small Dzong) that housed a statue of Buddha. It is said that Shabdrung ordered the architect, Zowe Palep, to sleep in front of the statue, while Palep was sleeping, the Shabdrung took him in his dreams to Zangtopelri and showed him the palace of Guru Rimpoche. From his vision, the architect conceived the design for the new Dzong, which in keeping with the tradition, was never committed to paper. The Dzong was named Druk Pungthang Dechen Phodrang (Palace of Great Happiness). The war materials captured during the battle with Tibetans are preserved here. Punakha is still the winter residence of Je-Khenpo and King Jigme Dorji Wangchuk convened the new national Assembly here in 1952. In the evening, hike to Khamsung Yulley Namgyal Choling Monastery. Overnight at hotel in Punakha.

After early breakfast drive back for 3 hours to Thimpu. Thimphu sightseeing includes a visit to the visit National Memorial Chorten, built in honor of our late King Jigme Dorji Wangchuk and also visit the Folk Heritage Museum, which is dedicated to connecting people to the Bhutanese rural past through exhibition of items and artifacts used in rural households, Textile Museum, where the art of traditional weaving is still kept alive and preserved through exhibition and has a good collection of old textiles which are rich in its color and design. Lunch will be served at a restaurant in Thimphu. After lunch visit the School of Arts and Crafts where the 13 Crafts are taught to the Young Children which was established in 1971 with two objectives in mind, (a) to preserve and promote  the traditional arts and crafts and (b) to create more job opportunities.

Day 04: Thimpu – Paro including sightseeing and hike to Taktsang.

After early breakfast, we drive to Paro for sightseeing in Paro and hike to Taktsang. Immediate after arriving in Paro again we drive to winding road to the Drukgyal Dzong, the ruined fort, which was once defended this valley from Tibetan invasions, and also visit a Bhutanese farm house of a local family at Drukgyal for a close up view of everyday Bhutanese life. We then drive beyond Satsam Chorten to hike up (or horse ride) to the Taktsang monastery (Tigers nest) for around 1.5hrs. At the view point, you will enjoy the stunning view of the monastery. The monastery can be visited where Guru Padmasambhava landed on the back of a tigress in the 8th century. We then walk back to the road point and visit Kyichu Lhahang, one of the oldest temples in Bhutan, overnight at hotel in Paro.

After breakfast, drive to Paro Airport and farewell for your flight to Kathmandu.  Receive from airport and transfer to Hotel.