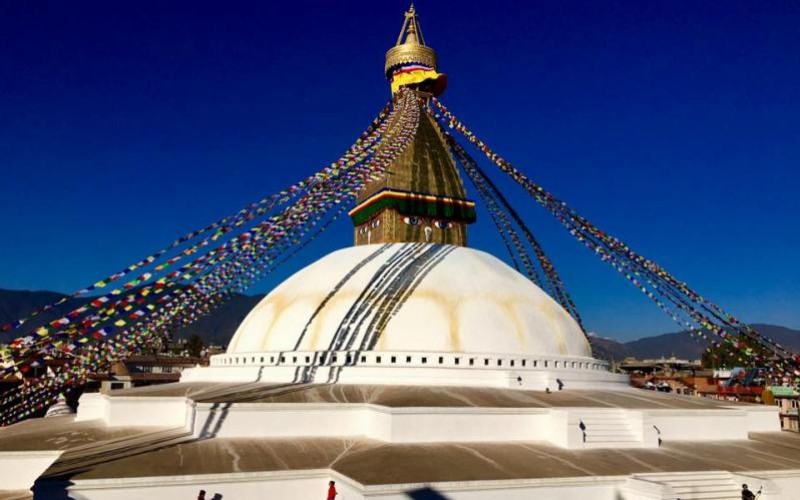 A visit of Kathmandu valley is extremely rewarding when it comes to getting insight into the history, culture and architecture of medieval Nepal. Kathmandu Valley Day Tour includes various historical, cultural and architectural monuments that are filled with medieval arts and crafts, myths and legends, history and age-long traditions. Here you will wholeheartedly appreciate the craftsmanship, beliefs and devotion and more importantly the unity among diversities.

This day tour includes famous Monkey temple, medieval Durbar square of Kathmandu, one of the holiest hindu temples in the world, Pashupatinath and another popular and sacred Buddhist stupa, Boudhanath. As Hinduism and Buddhism are the two main religions of the country, the day to day lives of the people and activities are clearly seen to have been influenced by these religions.

After the breakfast, the trip start with a visit to Swoyambhunath (Monkey temple). It’s about 6-8 hours tour.

Local name for this holy shrine is Swoyambhunath which literally means self-existed God but it’s nowadays more popular as Monkey temple. Local believe that this majestic monument was self sprung out of a lotus plant when the water of the valley was drained out. However as per the chronicles, this very place was already a very popular pilgrimage site even as early as in fourth century. The main monument of the site is the Buddhist Stupa. Stupa is the most sacred Buddhist monument as they are believed to have enshrined the relics of the Buddha, great gurus or masters. As renovation took from time to time, the present form of the stupa can be believed to have been built in 17th century as a massive renovation took place then.

Besides the stupa,there is a temple of Harati Devi, a mother Goddess worshiped by the people of Hindu and Buddhist faiths. She is the goddess of children, the goddess who cures smallpox. It’s a beautiful exam of religious harmony.

Then the trip to Kathmandu Durbar Square, Boudhanath Stupa and Pashupatinath Temple follows.

One of the medieval palace squares of Kathmandu valley, Kathmandu durbar square or Hanumandhoka Durbar square was the palace of the Malla Kingdom of Kantipur and the palace of the Shah kings after unification of Nepal. This durbar has great historical, cultural and architectural importance. This durbar square has witnessed numerous incidents that have changed the courses of the history. Popular temples of Kashthamandap and house of Kumari are also here. The legendary Kashthamandap temple was believed to have been built out of one single tree and the entire valley was named after this very temple. And the house of Kumari is another popular temple where the living Goddess Kumari resides. This tradition of worshiping a young girl as a living goddess has been in practice since medieval period. A young girl from Shakya clan of Buddhist Newars is worshiped as the incarnation of the Hindu Goddess Taleju. Although this tradition was started by Mall King but it was continued by Shahs and even after the abolishment of monarchy the tradition is still in practice. People have strong belief in Kathmandu as numerous ceremonies and worships take place in her honour.

Besides, the palace complex comprises of various other monuments and palaces that are architecturally very impressive and historically very important.

One of the holiest and oldest Buddhist Monuments in Nepal and one of the biggest stupas of this kind in the world, Boudhanath stupa is a very popular pilgrimage site. This world heritage is believed to have been a very popular pilgrimage site even as early as in 5th century. Local believe that this stupa which is believed to have enshrined the relics of Buddha Kashyapa was built by Lichchhibi King Mandev in 5th Century. In ancient times, all the pilgrims, traders, and travelers from Tibet to India or from India to Tibet used to travel through this holy land to pay homage to the Lord for a safe and comfortable passage in the journey.

Literally Boudhanath means the Lord of enlightenment and it is at present the center of Tibetan Buddhism. Numerous Tibetan Buddhist monasteries in and around Boudhanath suggest the same. Hundreds of visitors from Buddhist and non Buddhist background flock to this holy site everyday to receive spiritual merits or enjoy the majestic appearance of this very stupa.

One of the holiest Hindu temples in the world, Pashupatinath temple is dedicated to Hindu God Shiva. One of the Trinities, Shiva is the God of destruction and the most worshiped Hindu God in Nepal. He destroys for good reason and through destruction he facilitates the smooth transition of things and events from one stage to another. Hence he is also regarded as the God recreation. He is here worshiped as the Lord of animals or beasts. One of the oldest temples in the valley, originally the temple is believed to have been built before 5th century.  However as a massive renovation took place in 17th century, the present structure can be believed to be of that time. On the occasions of Hindu festivals Shivaratri and Teej, thousands of devotees visit the temple and pay the homage.

Non-Hindus are not allowed inside the main temple premises. However a beautiful view of the entire temple area can be enjoyed from the other side of the river. And the main attraction at this site is to observe the Hindu crematory practices. Just near the temple and on the bank of the holy river Bagmati, Hindus do the open-air cremation. For Hindus it’s very special to be cremated at this very crematorium as it helps to release the soul and rid it of any attachments to the body.